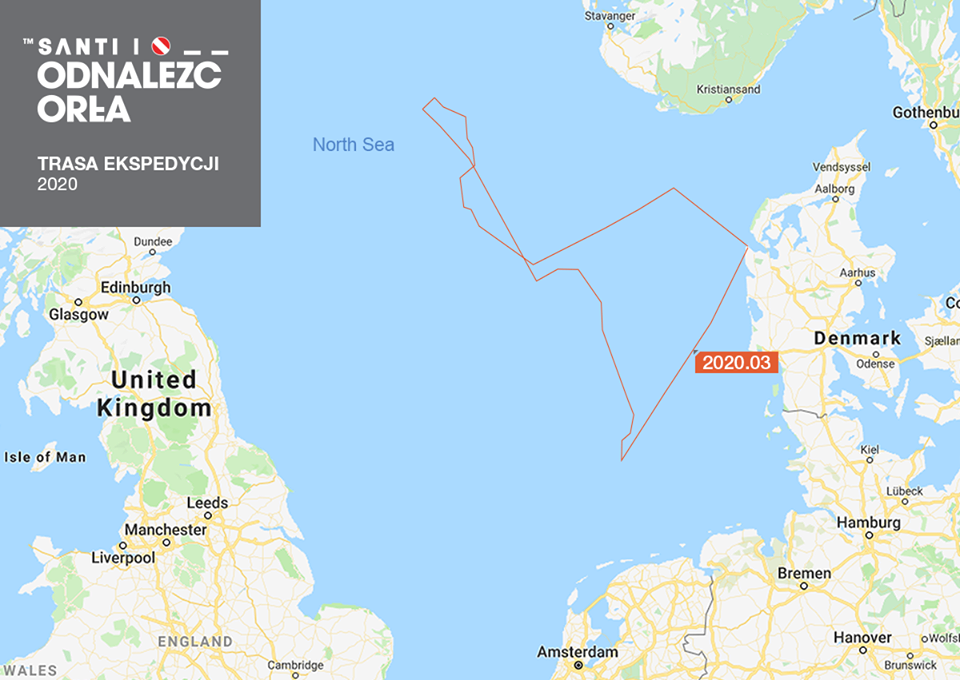 On 9th March 2020 the “Santi Find the Eagle” team returned to harbour from their latest expedition. The voyage in March experienced adverse weather conditions, with 7 m waves and high winds, but much was achieved in the five days at sea.

Their mission is to find the legendary Polish World War II submarine ORP Orzel, which went missing on her sixth and last patrol which commenced on 23 May 1940 sailing out of Rosyth under Royal Navy command. The Orzel (the name means eagle) and her heroic Polish and British crew were declared lost when she failed to return to base by 8 June 1940. The inspiring story of Orzel’s daring escape from Nazi detention in Estonia in the opening days of the Second World War is well known.

Santi Find the Eagle is a private foundation, with the main sponsor Gdynia-based Santi, a leading brand in the global dive equipment market.

For the ninth expedition, particularly significant as it was taking place on the 80th anniversary of the disappearance of the Polish submarine, the mission took place in partnership with the Sea War Museum Jutland, sailing from the Danish port of Thyborøn, the base for the previous three expeditions. This year the vessel chosen for the search was the survey ship Vina, 77 m long, 14 m wide, belonging to J D Contractor, and which is fully fitted with multibeam scanning equipment and facilities for diving.

One of the divers.

In the five days the crew sailed 743 miles, aiming to check specific points located in the area of British and German minefields during the war. In all, 32 points were checked and 20 wrecks scanned, of which two were submarines, raising the hopes of all involved that one might be ORP Orzel. It was not, but one of these ships was identified as British World War I submarine HMS L10 which was lost over 100 years ago, on 3 October 1918.

The wreck,  near the island of Terschelling, was examined using a remotely operated vessel, and the Santi Find the Eagle divers explored underwater, taking the first photographs of the submarine despite poor visibility.  Knowing the history of the destruction of HMS L10, it is likely that a second wreck, located just 160 m from the submarine, is a badly damaged German destroyer that took part in the sinking of the British vessel.

In total, in all expeditions, the Santi Find the Eagle team have located more than 400 wrecks. In 2017, they discovered the position of another British WW2 submarine, HMS Narwhal. This year’s search did not result in the long sought goal, but the whole team is even more determined to find ORP Orzel on another expedition that will be taking place soon, possibly this year.

Source : All About Shipping